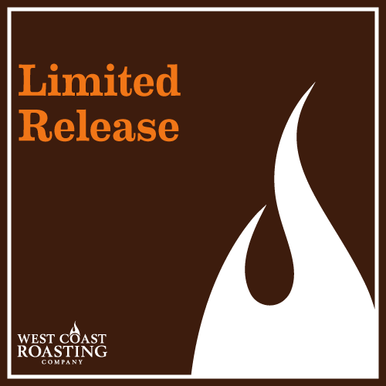 This year, I'm doing something a little different: I'll be buying very small amounts of very special coffees, 20-50lbs, and selling them here as limited edition coffees. I'll be rotating coffees through very quickly, I doubt most will last more than a week, so if something piques your interest, grab it quick! Since these are VERY limited amounts, and the holidays make it very hard to guage purchases, in the off chance I run out of one Limited Release, you will be sent the next one up.

I'm going to break my own rule here: I've decided to revisit this excellent coffee while there's still a bit left to grab! I've been obsessed with it, because it's simply FANTASTIC, just a high quality, clean, juicy, sweet Sumatra; hell, this morning I brewed up the last of my sample from weeks ago, and it was outrageously good. The only thing more outrageous is the grower who decided to natural process this in rainy Sumatra. Get it while it's here, it won't last long at all, A++ stuff (see 2 entries down for details!).

Timor is an interesting origin, with some unusual growing practices; for example, a lot of their coffee trees are very old, and were not cultivated and pruned for production quantity, and are very tall, requiring the pickers to climb to pick them. Then there's the processing: because this coffee is combined from 15 very small growers, each grower ferments and processes their coffee themselves, at home, instead of pooling and processing at a larger facility. Regardless, this coffee impresses, and is hugely versatile, working well in any brew method. Notes of cacao-nibs, brown sugar, and toasted pecan are balanced by gentle green apple tartness, apricot, and mild florals and even nutmeg.

This is a honey processed coffee from Finca Tasta, which is owned by 2 siblings. This coffee has massive chocolate peanut butter fudge notes, with orange fruit notes like candied orange peel, dried apricot, tangerine, and with lingering spiced honey notes. It's a strong departure from the last fruity few, and provides an absolutely stellar cup in these cold winter days.

I’m a huge fan of great Sumatras. I’m also a huge fan of natural process coffees. This coffee combines the two in an unusual package.

Typically, Sumatras are super earthy and heavily weighted toward the deep, heavy body and low acidity side of things, making them somewhat imbalanced, and due to processing challenges, usually funky. Indonesia gets a lot of rain, so they tend to use a process called wet-hulling, which is a large part of the flavor profile so common there. However, every country has fantastic coffee, and Sumatra is no exception. I tend to choose really high quality Sumatras that are well-processed, balanced, and exhibit a wide range of awesome flavors, adding dimension and breaking the Sumatra Status quo. This coffee takes processing to another level: natural processing leaves the beans to dry with the coffee cherry intact, and requires dry conditions. Obviously, the aforementioned large amounts of rain in Indonesia aren’t well-suited to leaving things laying around outside to dry, unlike Ethiopia or Yemen, making the general manager of this small farmers group, Pak Irwan, either highly driven, or slightly crazy, when he decided to invest in raised beds and rain covers, and process this coffee naturally.

Pecan pie, brown sugar  sweetness is the anchor of this coffee, along with 72% chocolate, balanced with loads of foresty cedar notes, sweet mango, pear, oolong tea, juniper, floral and herbal notes, and sparkling lime top notes. If you’ve never been a fan of Sumatra’s, this coffee may blow those notions out of the water.

This coffee is from a 4th generation farmer, who only started growing coffee 6 years ago. Their efforts have paid off, and they received a significant increase in price over Colombia's federal market value. This coffee is lush, playing the line between elegance and comfort coffee; mandarin orange, sweet pomegranate, and cherry, with gentle baking spice notes rounding it out.

This coffee is from an estate and washing station that placed 3rd in Rwanda's Cup of Excellence competition in 2018. Golden raisin sweetness, silky smooth body, mandarin orange, apricot, floral rose notes, and vanilla permeate this refined, elegant cup. Shipping toward the end of next week!

This coffee is grown on a 2.5 acre farm with it's own micromill, and this is the first year Hector has had enough drying tables to produce a honey-process microlot. The extra pay from this coffee will provide upgrades to his farm for next year. Let's just say I roasted a test lb, and my family was floored: this is just a seriously crowd-pleasing coffee, with heavy viscocity, caramelly sweetness, milk chocolate notes, and beautiful black cherry and stone fruit notes. Truly world-class coffee!

Testi Ayla is an independent washing station in the Sidama region, with a reputation for turning out both washed and natural coffees at a very high level. They also experiment with carbonic maceration and anaerobic fermentation, which I wanted to try but they're REALLY expensive, so I got this 'normal' raised bed natural. If I had to choose one origin to drink for the rest of my life, it would be Ethiopian, and my customers know I generally have amazing, top tier natural Ethiopias on hand. This is reaching peak Ethiopia natural berry explosion time here, which just makes me so happy: notes of chocolate, caramel, and thick with berry/jammy notes, and beautiful florals.

These offerings keep getting more and more special. This Costa Rica is grown by a farmer who’s family has cultivated the farm since 1895; it’s his 63rd crop he’s wrapping up this year on that land. He processes this coffee using anaerobic fermentation (if you want to know what that means see below), which profoundly affects the flavor. This coffee finished in the top 5 in the Cup of Excellence competition in 2017. Yes, this coffee deserves the descriptor ‘special’ just based on that, then we get to the tasting notes: cinnamon toast, gingerbread, clove, pear, apple, raisin, sugary sweetness and clean fruitiness in a buttery, complex cup.

Anaerobic fermentation: all coffees are processed using various levels of fermentation, be it natural process (fermentation of the cherry on the bean as it dries), or full wet process (much faster and more fermenty immersed in water). In both cases, it’s done out of necessity, to help remove the cherry from the bean, and it’s intent is purely functional. However, coffee processors are learning to manipulate the outcome of whatever fermentation process is used to influence a specific, desired outcome or flavor. Anaerobic fermentation is ‘without oxygen’; while there will still be oxygen present during the process, anaerobic refers to the process happening in a sealed, air-free tank, with no external source of air. There are many types of bacteria, some of which thrive in an anaerobic environment, others of which do not, and the anaerobic process heavily influences which bacteria survive to ferment, and hence the outcome and flavors brought out through the processing.

When I first got into coffee a few decades ago, I tried a Kenya at Peet's, and hated it. Sour, punchy, just too much going on. Since then, my tastes have expanded, and it was a particular Kenya from the godmother of American coffee, Erma Knutsen, that blew my mind. Unfortunately, Erma died, and Knutsen is gone, but good Kenya? Oh yes, Kenya grows some of the finest coffee on the planet. This coffee from the Rukira processing facility is comprised of coffees from 600 farmers, who are so small that each one only grows around enough cherry to create 60lbs exportable green coffee. That's tiny! So are these peaberries, but don't underestimate: blackberry, pineapple, pomegranate, plum, and green apple fruit notes with savory heirloom tomato, vanilla, and salted caramel; savory and sweet, bright and balanced, with a classic winey, grapey Kenya punch. It's a knockout!

It's time for a good washed coffee, so I turn to Guatemala as our next origin! When my supplier calls this 'one of the best Guatemalas I've ever had', I listen, and here we are. Grown by a doctor on his small 135 acre farm, with their own processing facilities, allowing the most meticulous care to be applied, start to finish. Good florals in the dry aroma, and in the cup is a whole sweet fruit basket: apple cider, red grape, plum, peach, starfruit, with loads of opulent milk chocolate notes and thick, heavy body.

Pacamara is a varietal developed especially to create GIGANTIC beans. If you've never seen a Pacamara, it's a little shocking. I've only carried a few Pacamara's, but the ones I've had have been amazing; that being said, I've never had a natural process Pacamara, which is unusual for the varietal and origin; add in 'buttermilk pancake and blueberry syrup' tasting notes, and HOLLA! I had to jump on this before it's gone. Oozing brown sugar sweetness, grape, black cherry, tropical fruit, clean and juicy. YESS!

Sipi Falls is an outstanding processing center/wet mill that produces some of the finest coffees Africa has to offer. They mostly produce wet-process coffees, but in 2016 started producing honey and dry process coffees, and they are simply outstanding. This cup is juicy, grapey, with loads of melon, apricot, berries, and purple plums, all floral, sweet, and elegant.

Write your own product review

All prices are in USD.